A wildlife art painting unprecedented in history, Jarvi’s epic masterwork features 208 different species
and is the subject of a brand new book from international publisher Rizzoli and a national museum tour.

Order your personalized copy of African Menagerie: A Celebration of Nature today by clicking here. 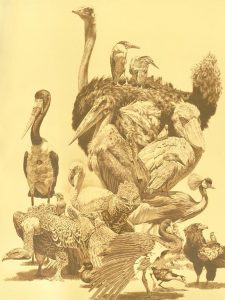 From its very conception seventeen years ago, “An African Menagerie” has experienced a journey of growth, meaning, and evolution. Now, it has entered the most exciting phase; creation of the epic vision.

The seven paneled twenty-seven foot long work will feature more than one hundred forty different species from the Dark Continent, spawned from early childhood fascination with both living collections of wild animals, and paintings from the distant past portraying large varied groups of exotic creatures.

In the “Menagerie,” the gathering of an incredible array of wildlife will be set against a grand panoramic backdrop, highlighted by a view of the receding snows of Mount Kilimanjaro. All of Africa’s icons including the Elephant, Leopard, Giraffe, Rhino, Hippo, and Zebra will mingle with such exotics as the Bongo, Okapie, and Mandrill.

More than eighty bird species; Ostrich, Shoebill, Lilac Breasted Roller, and Sacred Ibis among them, have also arrived. And man, who has come to dominate the earth, has been summoned to this gathering, as the natural world seeks answers to the growing issues of survival faced by countless species across the planet.

Allegorical storyline’s intended to dramatize the urgency of the moment are woven into the tapestry of this idyllic scene. For example, the arrival of the “Four Horses” from the far left, and the “Lion and the Lamb” seated directly in front of a “DaVinci” like figure in the foreground, compel the viewer to interact with the scene.

Over the years, the original concept of simply seeking to create art, has evolved into something far more meaningful: a message to humanity intended to inspire acts of conservation. Acts that will save, not just the great iconic species of Africa, but wildlife across our fabulously, diverse planet. 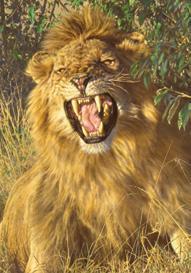 THE PREMIERE EXHIBITION
In preparation for the creation of “An African Menagerie,” more than 100 studies will be produced. Pencil, charcoal, monochromatic oils, mixed media and major full color oils will be created as I explore and familiarize myself with a multitude of species.

To date, fourteen of these works have been completed, six of which have been juried into major exhibitions including SAA, AFC, and “Birds in Art,” and one of these has been purchased by the Woodson Museum as part of their permanent collection.

More studies will focus on relative scale, personality, attitude, and the demeanor of a wide array of subjects. Numerous small multi-species paintings will be produced over the course of this process including “The Sunbirds,” “The Duikers,” and “The Ibis” studies, just to name a few. Eight of these pieces will be of major variety.

The following is a list of those works, along with a brief description.